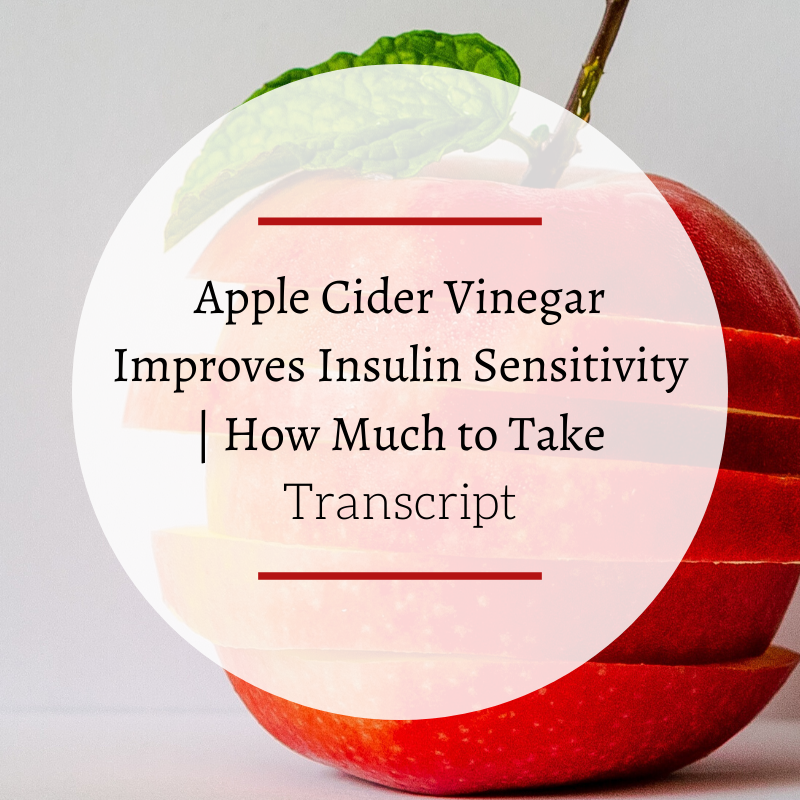 So we decided to dive into the research and find out what’s what with this amazing concoction.

What we found is pretty interesting!

What Does The Research Say?

It turns out that there are a lot of studies on apple cider vinegar’s effect on lipid profiles, glucose management, and insulin sensitivity.

A lot of those revolve around diabetics and diabetes — that kind of thing.

So we wanted to dive into the research on apple cider vinegar specifically for your blood sugar. We focused on this because I know a lot of people who have trouble losing weight have insulin resistance where a person’s insulin is not shuttling that glucose into their cells well enough like this guy.

So we have a couple of studies to bring to you.

This first one was The Effect of Apple Cider Vinegar on Blood Glucose Level in Diabetic Mice. (1)

So they found diabetic mice.

It says, “Therefore, in this study, it has been revealed that apple cider vinegar has considerable reducing effect on blood glucose levels in diabetic mice ”

It wasn’t very easy to figure out what the dosage levels would be for an adult from a mouse study.

So that was just like, ‘well, that’s interesting.’ So let’s go further.

Right. It supports the thought that apple cider vinegar has benefits for glucose metabolism or sugar metabolism.

Next, this study, Vinegar Improves Insulin Sensitivity to a High-Carbohydrate Meal in Subjects With Insulin Resistance or Type 2 Diabetes. (2)

So what they did in this study is they took insulin-sensitive people, insulin-resistant people, and type 2 diabetics, and they split them into groups.

They gave them apple cider vinegar before eating a high carb meal. That high carb meal had like eighty-seven grams of carbohydrates.

Then they tested their blood afterward at 30 minutes, I believe, and at 60 minutes.

What they found was by taking that apple cider vinegar before the high carb meal, they had a lot of improvement in their insulin sensitivity.

So their blood glucose went up as expected from the meal, but then it also came down more normally whereas an insulin resistant person that [blood glucose] would stay high for a longer period of time.

So again, some of these dosages were…

Yeah, this was 20 grams of apple cider vinegar and they mixed it with water and a teaspoon of saccharine.

Our apologies to our non-American viewers. We don’t do well trying to figuring out conversions.

Yeah well, it would be milliliters, but I’m not really sure.

I guess it would be.

So this next study is called Vinegar Ingestion at Bedtime Moderates Waking Glucose Concentrations in Adults With Well-Controlled Type 2 Diabetes. (3)

So this one said consuming either two tablespoons of apple cider vinegar (the two groups), or water at bedtime with an ounce of cheese, which is kind of interesting.

They threw in the cheese to kind of mimic maybe a typical little late-night snack or something, and also to mitigate some of the taste of the vinegar.

So they found out that “Fasting glucose was reduced 2% in the placebo group, and 4% in the vinegar treatment.

Vinegar had a better result.

It had a better result. Now the researchers also speculate that the protein may have had a little bit of a synergistic effect, but they don’t really know.

So, you know, it’s one of those things you do a study, and afterward, you go [ugh].

So basically, our conclusion from the research that we did on apple cider vinegar is that it does have benefits if you are insulin resistant.

It could help you become more insulin sensitive.

So we wanted to decide what would be a good dose and when to utilize it.

What we came up with was…

Teaspoons were what the study used, one of the studies used 2 tablespoons like twice a day, and that’s a lot.

We’re going to say two tablespoons at bedtime. I mean, that’s what this study [third study] did, and I think that would be doable for most people.

Yeah, so if you wake up with high blood glucose and you want to see if you can get that under control with apple cider vinegar, that would be what our recommendation would be:

Start with two tablespoons at night before you go to bed.

Which Vinegar Should You Buy?

Let’s talk about the vinegar.

Good point. So you can buy cheap apple cider vinegar, but don’t do that.

You want the ones that look cloudy. They have the sediment on the bottom that’s called the ‘Mother.’ That is the apple cider vinegar that you want to get.

This is Bragg’s brand.

It even says with the “mother” on there.

Yeah, it does. Bragg’s is, at least in the United States, is a very common one in our grocery stores. You might want to look in the health food aisle. It’s typically there.

Right, so we have two tablespoons of apple cider vinegar measured out.

So we are going to just throw it down right here on camera so you can see how easy it is to take. You go first.

I’m not going first. We’re going together. Yeah, it’s not the tastiest stuff.

That’s why some of these studies used water. In my opinion, that just means there’s more of it to get through.

Yeah, you can dilute it with water if you want, but we are going to just shoot it down.

I think I’ve only done this once in my life, and I remember it being pretty bad.

Yeah. Okay, so remember you just got to go down like really fast.

You will want to dilute the apple cider vinegar with water.

Thumbs up for the apple cider vinegar.

Thank you for reading, we hope you have a wonderful week!