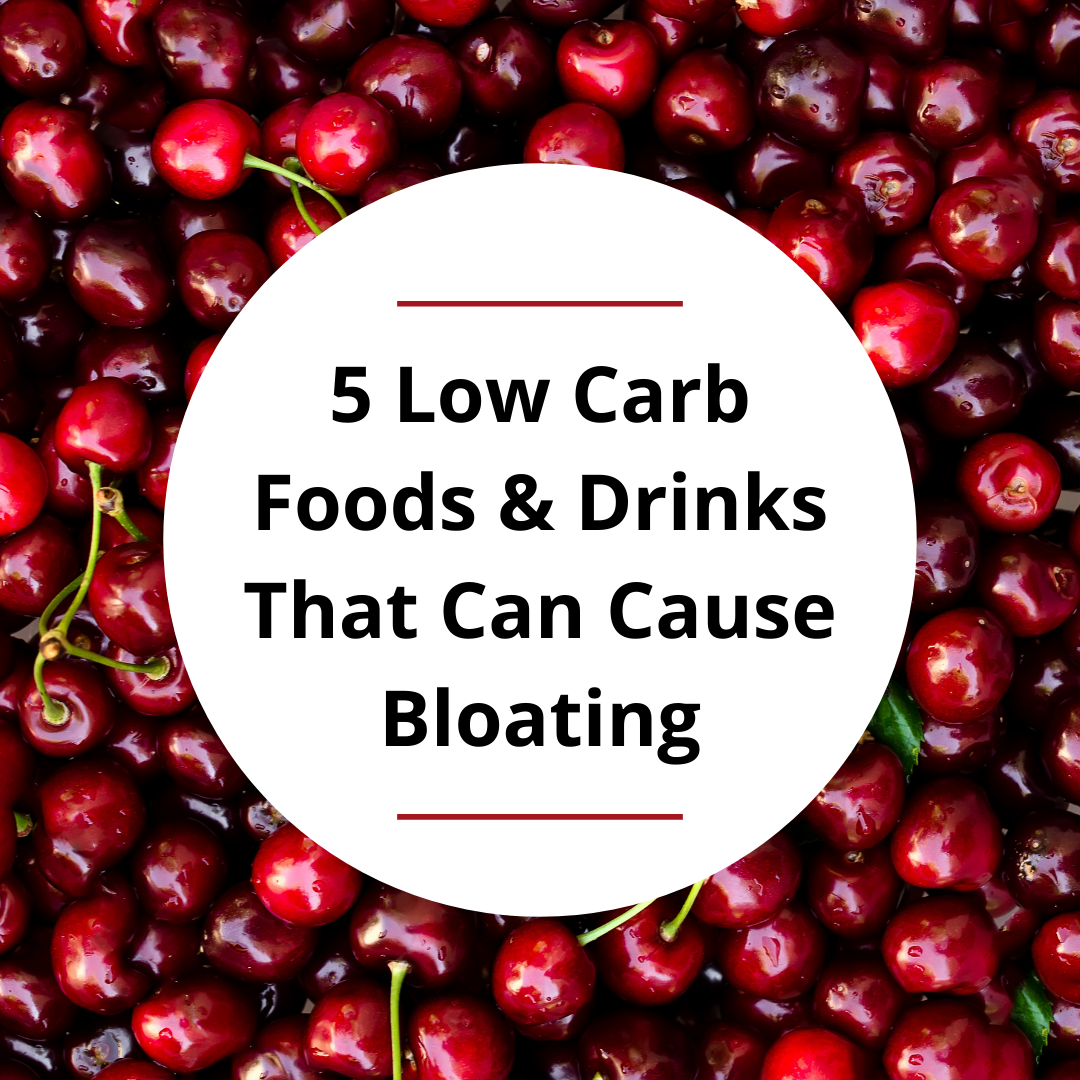 Many people experience relief from bloating when they follow a low carb diet. But what if you are not one of those people or you experience occasional bloating despite sticking with your diet? In this post, I’ll reveal low carb foods and drinks that can leave you feeling bloated.

5 Low Carb Foods & Drinks That Can Cause Bloating [Video]

One of the reasons that a low carb diet is so effective for weight loss is because it keeps the fat-storing hormone called insulin low. This low insulin level not only helps to regulate fat storage but also sodium or salt retention.

Basically stated, when insulin is low, your kidneys get the message to flush out excess salt. When salt leaves the body, water tags along, which leaves you feeling lighter and less bloated (1).

However, it is not uncommon to have a food sensitivity or intolerance that can leave you feeling uncomfortable despite the usual low-insulin advantage.

Diagnosing a sensitivity is not always easy, and often discovered after the fact based on how you felt after you ate something that didn’t agree with you. But, there are some types of low-carb foods that are more apt to cause bloating, so let’s go over those.

The first one of interest to a low carb dieter is sugar alcohols. These sweet-tasting sugar substitutes are often added to keto snacks to improve the crave factor and lower the net carb count.

When we think about calculating net carbs, the formula that might come to your mind is the total grams of carbohydrates minus the grams of fiber.

That simple formula works for natural foods like avocados, but if a food is processed, like a keto bar or shake, the food manufacturer can also subtract the sugar alcohols from the food.

The reason they can do this is that, like fiber, sugar alcohols resist absorption in the small intestine. Because of this resistance, they should not have a substantial impact on blood sugar or insulin levels.

However, not all sugar alcohols are created equal. Some get absorbed easier than others, which means that they can affect your blood sugar and insulin levels to a larger degree.

If you think this addition of sugar alcohols sounds like a sneaky way to make a snack appear to be better for you than it is, I agree. For this reason, I count total carbs, not net carb. But beyond that, sugar alcohols are known to cause stomach upset and bloating in sensitive individuals.

Besides keto snacks, these sugar substitutes are often added to sugar-free products like chewing gum or mints. But, ultimately, the best way to avoid sugar alcohols is to avoid processed foods and focus on eating whole foods. When you do that, you can side-step a lot of problems.

However, there are some healthy and wonderful low carb foods that, in a sensitive person, can cause bloating.

Cruciferous vegetables are a perfect example. These low-carb vegetables provide fiber, vitamins, and minerals. So, they can be included in your low carb diet, unless you experience bloating or discomfort after eating them.  This family of vegetables includes one of the most versatile low-carb vegetables, which is cauliflower.

Low carb dieters like this vegetable because it can be riced or mashed to act as a substitution for higher-carb rice dishes and mashed potatoes. The saving grace, if you will, with cruciferous vegetables, like cauliflower, is that they are more inclined to cause digestive issues when eaten raw.

There are some fruits that have the potential to cause bloating, including apples, cherries, mangos, peaches, pears, and watermelon. The reason these otherwise healthy foods are problematic for some people is because they are classified as FODMAPs.

The fundamental issue with FODMAPs is that these short-chain carbohydrates can be fermented by certain bacteria in your gut to produce hydrogen gas. It is that gas that leads to the bloating.

So, if you eat these fruits, pay attention to how you feel. If you feel bloated, then you may be sensitive to FODMAPs, but if not, they can be worked into a healthy low-carb diet.

Dairy products can cause bloating in those with lactose intolerance, which is a digestive problem that becomes more common as we age. It is estimated that around 70% of the world’s population will develop some degree of lactose intolerance during their adult years.

The reason for the delayed onset is because our bodies tend to produce less lactase as we get older. Lactase is the enzyme that breaks down the naturally-occurring milk sugar known as lactose. Hence the name, lactose intolerance.

Because the lactose doesn’t breakdown in the small intestine as it should, it makes its way down to your colon, where bacteria break it down, forming the gas that makes you feel bloated.

The good news is that not all dairy products are high in lactose. In fact, an advantage you have as a low carb dieter is that you naturally gravitate toward the high-fat dairy choices. More times than not, if a dairy food is high in fat, it is low in the problematic milk sugar lactose.

The takeaway for you if you feel bloated after eating dairy, is to go for the full-fat dairy products and hard or aged varieties because they naturally contain less lactose. For instance, go for Cheddar, Parmesan, or Swiss Cheese rather than ricotta or cottage cheese. Use heavy cream rather than skim milk and full-fat yogurt, not low-fat yogurt.

Another item that can lead to bloating is carbonated drinks, including bubbly waters, like mineral water or club soda, diet soft drinks, and low-carb beer. And, as you might suspect, the culprit that causes bloating is the carbon dioxide that provides the fizz.

For sensitive individuals, this gas can accumulate in the digestive tract, resulting in bloating. Beer is not only carbonated, but also contains some fermentable carbs, so it qualifies as a FODMAP drink.

If you can’t tolerate a beer without feeling bloated, it is likely that you are sensitive to the carbon dioxide gas or the fermentable FODMAPs it contains.

So, we see that some popular low-carb foods, like packaged keto snacks, raw cruciferous vegetables, fruits that are high in FODMAPs, certain dairy products, and carbonated drinks, have the potential to irritate a sensitive digestive tract.

However, for most of us, we can enjoy these foods and use them as part of an effective and enjoyable weight loss plan.

If you’d like to get started on a healthy low-carb diet, I encourage you to start with my 0,1,2,3 strategy. It is a great way to transition to a low carb way of eating and intermittent fasting. Thanks for reading and have a great week!