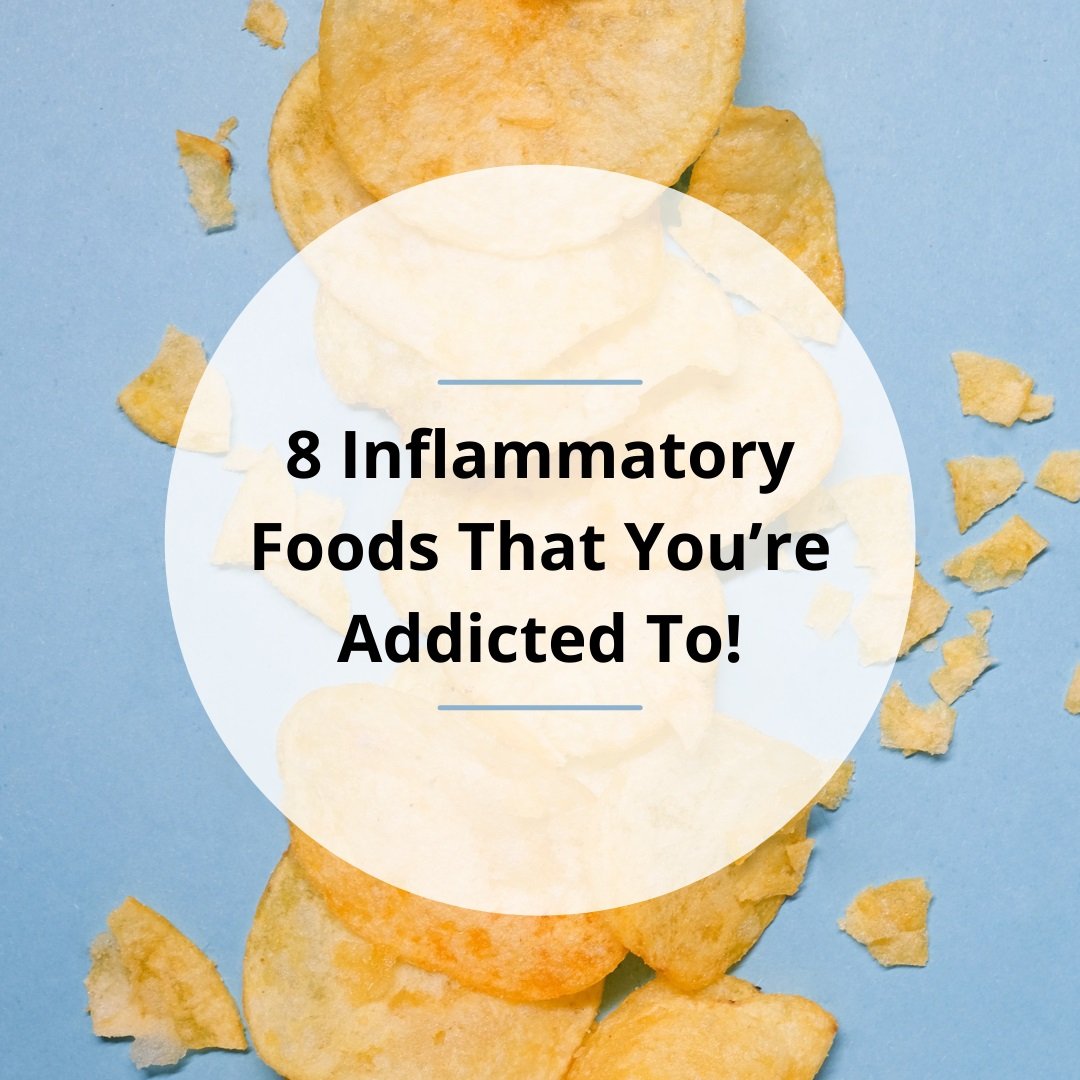 You can’t put your finger on it, but something doesn’t feel right. You’ve been tired. Your joints ache. Your weight loss has stalled, and you just can’t shake your melancholy mood. If this is you, your diet may be taking you down the wrong path.

Freedom from disease and uncomfortable symptoms is not only about eating more healthy foods; avoiding harmful foods is equally important. That is easier said than done when the foods that are causing harm are the same ones that top the list of addictive foods. This post will reveal eight inflammatory and addictive foods to avoid to feel better.

In this video, you will learn…

Inflammation is not always a bad thing. It fights off bacteria, heals wounds, and cleans up infections. But chronic inflammation perpetuated by unhealthy lifestyle choices and eating inflammatory foods is the root cause of many diseases and uncomfortable symptoms, such as aches, pains, fatigue, depression, anxiety, and unexplained weight gain.

Foods containing added sugar, high-fructose corn syrup, hydrogenated oils, and refined carbs are at the top of the list for inflammatory foods. These foods include things like:

What else do these foods have in common? They are all processed foods and top the list of addictive foods, according to a study published in 2015 (1).

Many inflammatory foods are also addictive foods, which is not great. And, of course, this list is not complete. Each of these foods has a few cousins. For example, chips include not only potato chips but also corn chips and Doritos. Alongside soda, we can count sugary energy drinks and processed fruit drinks.

But what happens inside your body when you eat foods that contain inflammatory ingredients?

A 2022 study out of Germany found that people who consume sugar and other carbohydrates in excess over a long period have an increased risk of developing an autoimmune disease, including Crohn’s disease and ulcerative colitis, type 1 diabetes, and chronic inflammation of the thyroid gland.

Sugar is a prominent ingredient in chocolate, ice cream, and soda, which are three of the inflammatory items that made the list of top addictive foods. The inflammatory reactions are also seen with refined carbohydrate foods like pizza crust, cookies, cake, crackers, hamburger buns, white bread, and low-fiber cereals. The refining process strips away the components that slow digestion. Even though these foods may not have sugar listed prominently on their ingredient list, they quickly become sugar inside you after you eat them.

This brings up a point about ingredient lists. When you turn a packaged food over and look at the list, the first ingredient is the most prominent one. Most people know sugar is bad. So, food companies often split their sugar content into different types. That way, the word “sugar” doesn’t appear at the top of the ingredients list.

Therefore, it is not uncommon for a packaged snack food to contain two, three, or even four different sugars. For instance, I picked up a package of Golden Delicious Apple Chips at the grocery store. If you just go by the package, you’d think they are a healthy alternative to potato chips.

However, when you turn the bag over and read the ingredients, you see that it contains corn syrup, sugar, and dextrose. That is sugar, sugar, and sugar, but because each one is a bit different, they can be shown way down on the ingredient list, leaving apples as the star ingredient at the top.

High fructose corn syrup is a common ingredient in soda and energy or sports drinks.  Consuming this ingredient on a regular basis adds an unnaturally high amount of fructose to your diet. This leads to inflammation, insulin resistance, and easier weight gain (3).

When it comes to inflammation, you are not doing yourself any favors by switching to diet beverages. These drinks use artificial sweeteners like aspartame, which raises red flags regarding increased inflammation (5).

Food manufacturers use the process of hydrogenation to make liquid unsaturated oils more solid and improve a food’s shelf life. This man-made change is why you can keep a jar of peanut butter in the cupboard for a few months without it going bad.

It also keeps the cost of junk foods low because cheap liquid oils like soybean, sunflower, safflower, and canola oil can be altered in this way. These oils create an imbalance between omega-6 fatty acids and omega-3 fatty acids. This imbalance produces inflammatory chemicals.

Partially hydrogenated oils contain trans fats. They are related to fully hydrogenated vegetable oils, but not the same thing. Unfortunately, where they are similar is in the fact that they both create inflammation inside of you.

A study published in the American Journal of Clinical Nutrition found a link between trans fats and full-body inflammation, which raises your risk of heart disease and diabetes (6).

Trans fats have a fairly well-publicized past. In 2015, the FDA determined that partially hydrogenated oils, and therefore trans fats, are “not generally recognized as safe.”

Unfortunately, they are still found in many addictive US foods, such as French fries and other fried foods, frozen pizzas, cookies, cakes, donuts, crackers, and packaged snack foods. The way they sneak it into food is due to a labeling loophole. The nutrition facts label on a food item can be listed as 0 grams of trans fats if it contains less than 0.5 grams of trans fat per serving.

If we peel away the layers to get to the root cause of diet-related inflammation, we see that much of the problem lies with processed foods and fast foods. These foods are easy and convenient but contain inflammation-causing ingredients. If you are looking for a way to get away from addictive processed foods, I invite you to learn my four daily habits, also known as my 0,1,2,3 strategy. The strategy provides a guide for getting sugar and other inflammatory foods out of your diet by replacing them with hunger-satisfying whole foods.