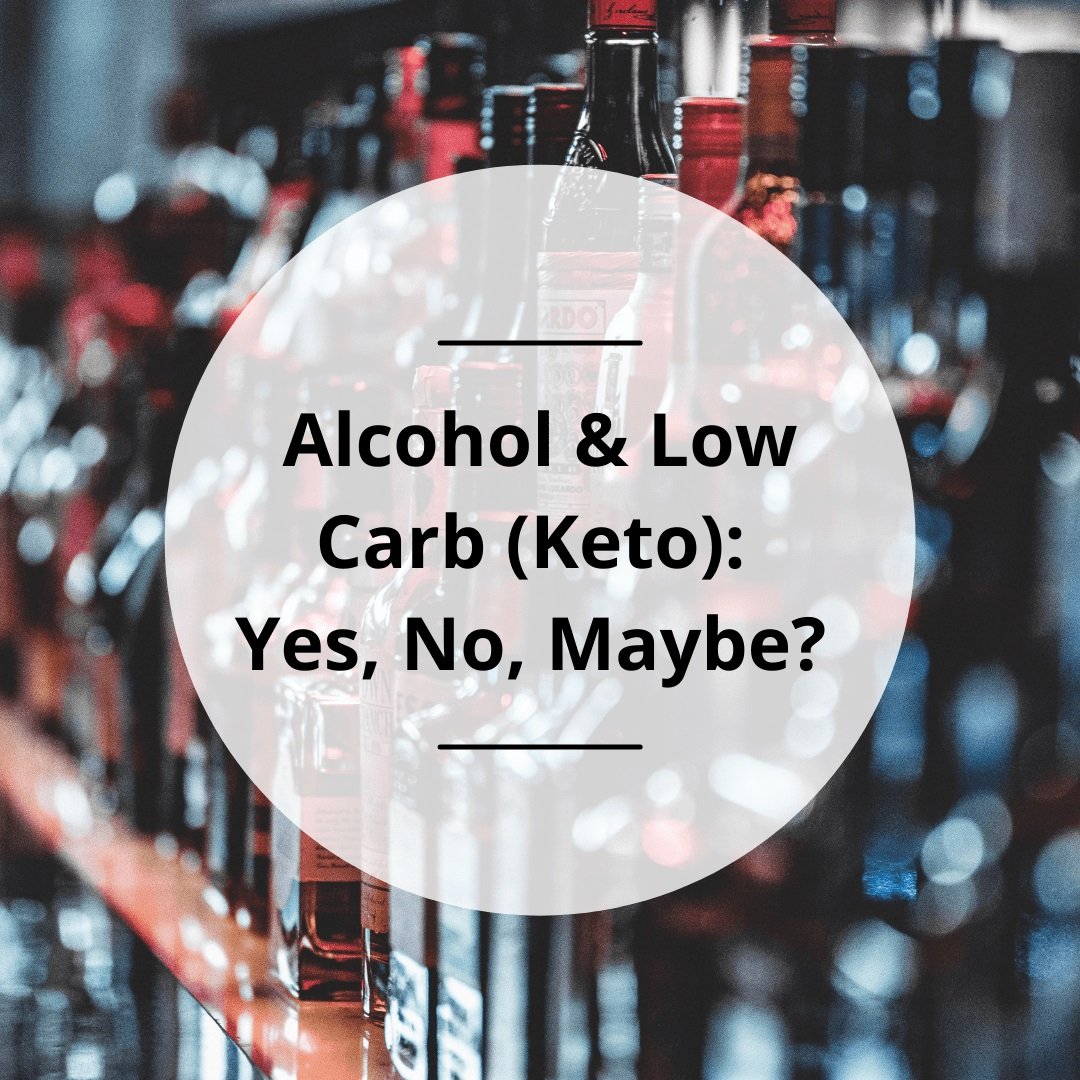 Alcohol is the product that is produced from the fermentation of sugars, fruits, or grains. Those raw materials contain carbohydrates. However, yeast or bacteria react with those sugars and starches during the fermentation process and convert them to ethanol, which is the alcohol found in alcoholic beverages.

Unlike carbs, ethanol does not spike the fat-storing hormone called insulin. So? Does that make alcohol a low-carb or keto-friendly drink? Ehh. It’s a lot to unpack, but here we go!

Is Alcohol OK on a Keto or Low Carb Diet? Summary

Alcohol is a controversial beverage, and some people should avoid alcohol due to issues they have with dependency. Also, heavy drinking has been linked to multiple health problems. If you have health or dependency concerns, abstinence (Alcohol = no) is your best route.

But what if you enjoy a casual drink or two? Does alcohol get a green light (alcohol=yes), or is the answer for you somewhere in between yes and no (alcohol=maybe)? Let’s break this down by looking at the different types of alcoholic beverages.

Alcohol is typically split into three categories: beer, wine, and spirits or liquor. Generally speaking, beer has the lowest alcohol content, and spirits have the highest.

Beer and wine contain a mix of carbohydrates and ethanol. Pure spirits, such as vodka, gin, tequila, rum, and whiskey, are zero-carb drinks. Even though starch is the raw material that goes into creating spirits, the end product is the distilled or extracted carb-free alcohol.

At the beginning of this blog post, I mentioned that alcohol (ethanol) does not spike the storage hormone insulin (1).

With no carbs, you can make the argument that spirits check off a lot of boxes as a keto-friendly drink. But ethanol is far from being a free pass. Ethanol may be carb-free, but it is not calorie-free. It contains 7 calories per gram which is more than the 4 calories per gram found in carbohydrates. Alcohol provides more energy than carbs but lacks vitamins, minerals, and other nutrients that your body needs (2) (3).

How Your Body Handles Alcohol

On top of that, unlike carbohydrates and fat that can be converted into storable energy, alcohol cannot be stored and utilized later when there is an energy need (3).

Therefore, your body must make the breakdown of alcohol its top priority. In other words, when you drink alcohol, your body metabolizes it before other food nutrients (3).

This brings up the question of what happens when your alcoholic drink also contains carbs, as we see with mixed drinks, wine, and beer?

A study published in the Journal of Clinical Investigation performed a test that mimicked having alcohol with refined carbohydrates. When refined carbs are digested, they send sugar in the form of glucose into the bloodstream. In this study, participants were intravenously fed ethanol and glucose.

They concluded that ethanol was a preferred fuel preventing fat, and to lesser degrees, carbohydrates and protein, from being oxidized. It also caused acute insulin resistance, which was compensated for by increased insulin secretion (4).

These are not things you want if weight loss is your goal.

Spirits, by themselves, are carb-free. However, spirits are often mixed with high-carb mixers. For instance, if you take zero-carb rum and add juice and simple syrup, you now have a tasty Daiquiri. However, that mixed drink is full of ethanol and sugar.

Beer and wine are similar to mixed drinks in that they contain nutrients other than alcohol that must be broken down.

I am not saying that the best weight loss approach is to drink spirits straight. If that is what you are thinking, you’ll want to go back to the part of our discussion on empty calories. However, I do want to give you both sides of the weight loss argument.

Alcohol Intake and Your Weight

Research (that is not sponsored by alcohol producers) shows that light-to-moderate drinking reduces the risk of weight gain.

One study followed normal-weight women for more than 12 years. The analysis found that light-to-moderate alcohol intake led to smaller weight gain and a lower risk of becoming overweight (5).

A systematic review, which is a type of study that brings together the findings of multiple studies, showed that heavy drinkers may experience weight gain more commonly than light drinkers. But light-to-moderate drinkers, especially wine drinkers, may receive some protection against weight gain (6).

Just as a side note, the findings leaned more toward wine drinkers because they tend to have a healthier overall dietary pattern, and components of red wine, like resveratrol, are associated with improved fat metabolism.

What is Light, Moderate, Heavy Drinking?

The definition of heavy, moderate, and light alcohol intake varies wildly from one source to the next. For instance, one study I shared earlier defined heavy drinking as 80 drinks or more per month, which is about two and a half drinks a day.

Most of the studies that were analyzed in the systematic review that I mentioned earlier defined heavy drinking as 4 or more drinks/day.

The National Institute on Alcohol Abuse and Alcoholism (NIAAA) defines heavy drinking as more than two drinks per day for men and more than one drink a day for women.

What is a Standard Drink Size?

Another question regarding alcohol consumption is the definition of a standard drink? Below is a graphic from the NIAAA.

They share that, “In the United States, one “standard” drink contains roughly 14 grams of pure alcohol.” That roughly works out to one drink equaling either a 12-ounce regular beer, a 5-ounce glass of wine, or a 1.5-ounce shot of distilled spirits.

If you think that all feels like a muddled mess, I agree. Here’s the thing: intuitively, most of us don’t need a chart to determine if we drink too much. If you are using a low carb or keto diet for weight loss, cutting back on your alcohol intake will take a burden off your liver, eliminate empty calories, and make it easier to avoid tempting high-carb foods.

There are many considerations when it comes to drinking alcohol, and it is not right for everyone. If you have health or dependency concerns, abstinence is your best route. However, if including alcohol in your diet is something you’d like to do, keep your intake light-to-moderate.