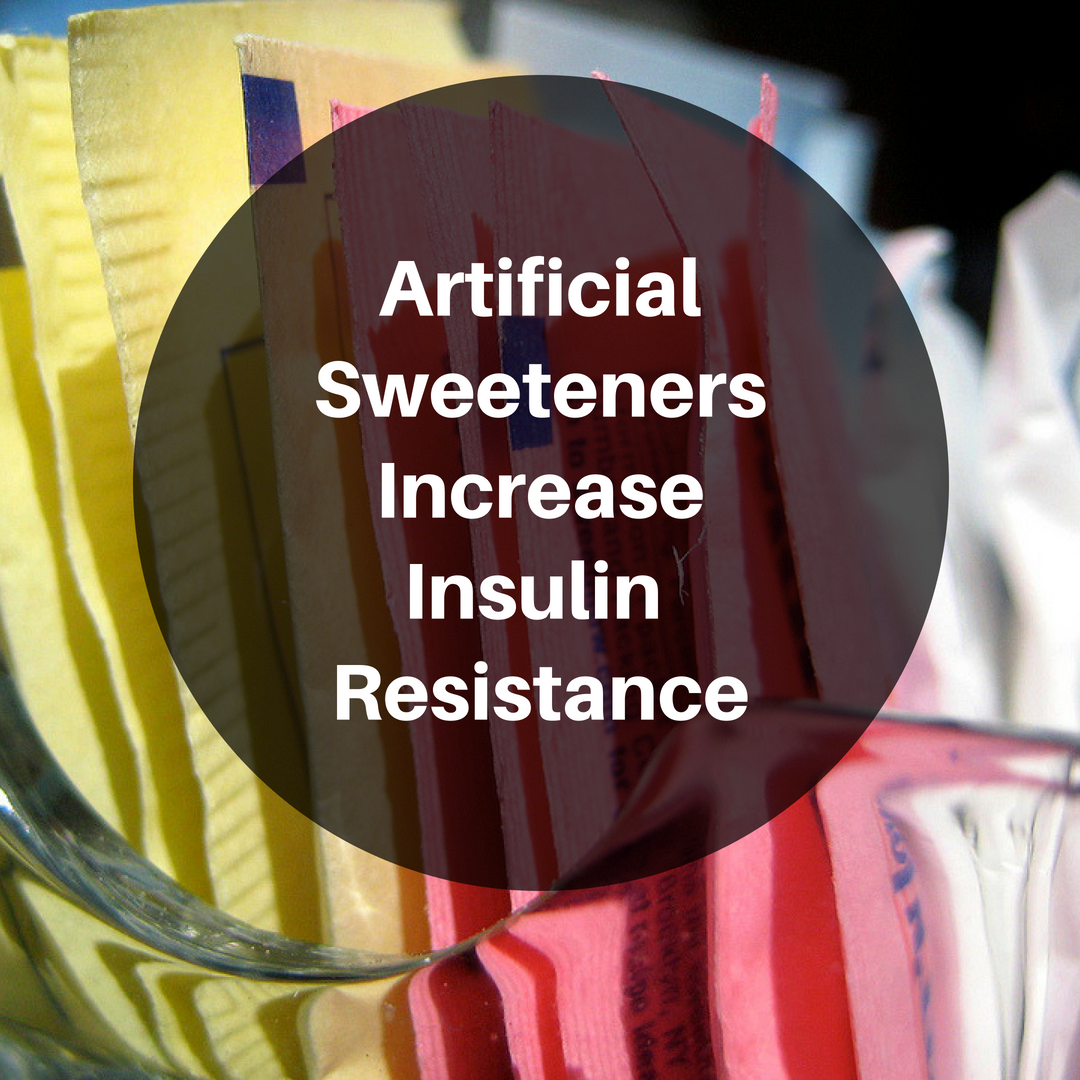 There are many non-caloric sweeteners that you can use to replace sugar in your diet.

They are in everything from diet sodas and sugar-free treats to coffee or tea.

However, if you are relying on them to lose weight, you might be inadvertently hampering your progress.

Follow along to learn how artificial sweeteners increase insulin resistance and turn you into a good fat-storer and a poor fat-burner.

Does your diet include artificial sweeteners?

The research presented in this video reveals that non-caloric sweeteners have an impact on insulin levels.

Since insulin is your fat-storing hormone, you may want to rethink how often you rely on artificial sweeteners, especially if you are a slow loser.

For those of you that don’t know, I have a second YouTube channel that I run with my husband.

On that channel, we tested our blood glucose and ketone levels after drinking coffee with different sugar substitutes stirred in to see how they would affect intermittent fasting.

Here is the link to our first round of tests, so you can see the complete results.

Before we ran the tests, our assumption was that since the sweeteners did not contain calories, they would have little effect on our blood glucose and ketones.

Therefore they would be fine to consume during our intermittent fasting window.

What we found instead, was that each sweetener performed worse in some capacity than black coffee alone!

Some sweeteners seemed to blunt our ketone production while others caused a bump up in our glucose readings.

What Do Our Bodies Reactions to the Artificial Sweeteners Mean to You?

These reactions (i.e. lower ketones and higher blood glucose) are signs that your body is moving out of fat-burning mode.

Now, I will be the first to admit that these were very small studies with just two subjects, and we couldn’t control for all variables.

Still, after testing eight different sugar substitutes, and getting similar poor outcomes, it was certainly enough for us to ascertain that non-caloric, artificial sweeteners are not the metabolic free ride that they are advertised to be.

There is Additional Evidence That Artificial Sweeteners Increase Insulin Resistance

After this testing period, I started researching the metabolic effects of non-caloric sweeteners and found a great deal of evidence linking these artificial sweeteners to insulin resistance.

Insulin resistance is something I have mentioned often on my blog because it is a common problem seen in people who have trouble losing weight.

It is especially difficult for people who have been overweight for years or have a long history of eating a poor diet that was high in refined carbs.

What Exactly is Insulin Resistance?

Basically, with insulin resistance, your cells grow tired of responding to the hormone, insulin.

Insulin’s job is to shuttle sugar, or glucose, into the cells.

When the cells become resistant, glucose can’t be used as energy.

Instead, it builds up in your blood and as a last resort gets dumped into fat storage.

The Main Focus of These Artificial Sweetener Studies

The studies I am going to cover in this post focus mainly on the sweeteners that you might know as the yellow, blue, and pink packets.

In other words, sucralose, aspartame, and saccharin. Which are found in Splenda, Equal, and Sweet-N-Low, respectively.

If you are interested in a different sweetener, I encourage you to watch the testing videos I did with my husband.

If you are more research-minded, use a site like Google Scholar to find reliable information about the sweetener you’re interested in.

The Link Between Artificial Sweeteners, Gut Microbiome, and Insulin Resistance

What I have found is that many of the studies on non-caloric artificial sweeteners point to the negative they have on the gut microbiome to show how they are linked to insulin resistance.

Your gut microbiome is a collection of bacteria that live in your intestinal tract.

We are discovering these bacteria have an impact on everything from your metabolism to your immune function.

So the health of your gut microbiome is very important!

This study took a look at the sweeteners and found that there is “mounting evidence suggesting that low-calorie sweeteners should not be dismissed as inert in the gut environment.”(1)

It goes on to say that these sweeteners, “Sucralose, aspartame, and saccharin… have been shown to disrupt the balance and diversity of gut microbiota.”

This means that, while the artificial sweeteners are not putting calories in your body, they are impacting your gut bacteria.

As we will see in this next study that disruption of the gut microbiome caused by artificial sweeteners can lead to insulin resistance.

In this study, the researchers were able to demonstrate that consumption of commonly used NAS, or Non-caloric Artificial Sweeteners, induced glucose intolerance, (a pre-diabetic state associated with insulin resistance), by altering the gut microbiome. (2)

Lastly, this very recent study showed that after four weeks of consuming sucralose, which is the sweetener found in Splenda, healthy volunteers experienced a decrease in insulin sensitivity. (3)

Prior to the test, these healthy volunteers did not use artificial sweeteners and had normal glucose readings.

However, after just four weeks of ingesting sucralose in a pill form, their whole-body insulin sensitivity was lowered.

This led the researchers to conclude that sucralose does have an effect on insulin resistance.

Can We Conclude That Artificial Sweeteners Increase Insulin Resistance?

The bottom line is that these artificial sweeteners DO have a metabolic effect on your body.

Unfortunately, we still don’t have a very clear idea of what they do.

At this point in time, we are likely only scratching the surface in our understanding of the true impact they have on your health and ability to lose weight.

My Opinion on Using Artificial Sweeteners on a Low-Carb Diet

I understand that moving away from the addictive pull of sugar is challenging, so I will leave you with the advice I share with anyone who asks:

You can, if you choose, use sugar substitutes to help transition away from sugar, but you’ll be happiest with your results if you wean yourself off of artificial sweeteners as you progress.

Thank you for reading. I hope this information will help you reach your healthy goals!