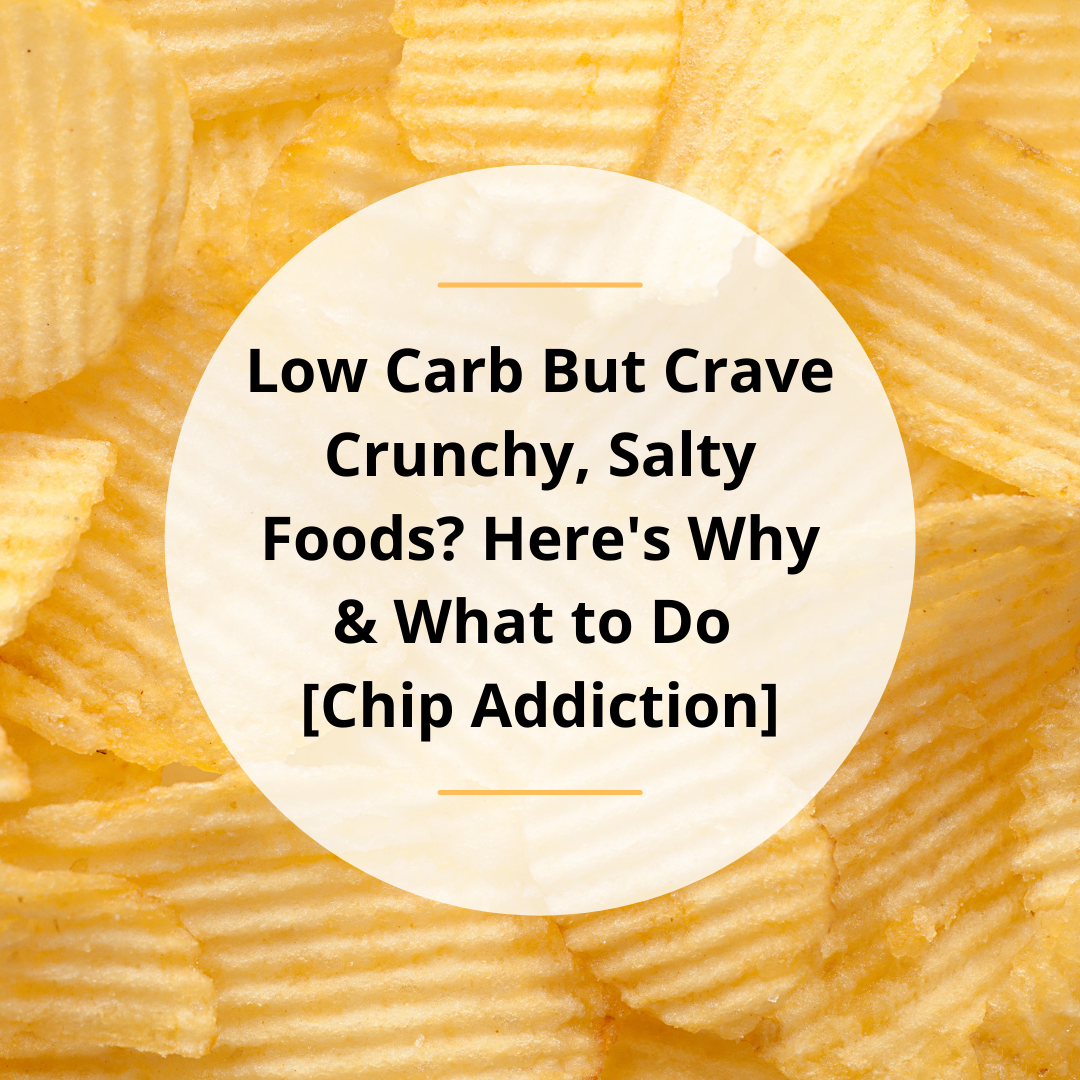 Are you bothered by cravings for crunchy, salty foods? Some low-carb dieters have no problem giving up the sugary sweet treats, but when it comes to foods like potato chips, the pull is strong. This blog post shares why we crave salty, crunchy foods and practical solutions to avoid derailing your low carb diet.

Low Carb But Crave Crunchy, Salty Foods? Here’s Why & What to Do [Video]

The Right Mix for Addiction

When people were asked to rate 35 foods to determine which were most associated with addictive-like eating behaviors, it should come as no surprise that potato chips ranked near the top of the list (1).

Part of the reason chips are so addictive is their makeup. They contain easily digested carbohydrates mixed with fat and salt. This combination of ingredients sets off pleasure alarm bells in your brain that make you crave more. However, when it comes to processed snack foods like chips, pretzels, and flavored corn chips, the texture of the food also plays a role in our inability to stop eating despite the desire to do so.

The texture of a food is often referred to as the mouthfeel, and it is part of the entire sensory experience associated with eating crunchy foods. It can also explain why a binge often involves a combination of crunchy snacks and melt-in-your-mouth sweets.

There is a phenomenon called Sensory Specific Satiety that refers to the declining satisfaction we get from eating a particular type of food and the subsequent increase in appetite that we get when we switch to a new taste or texture (2).

In other words, you might be hooked on the bowl of chocolates. But after eating them a while, you’ll be more drawn to the salty, crunchy bowl of potato chips sitting beside it or vice versa.

A heightened desire for salty snacks can also be related to dehydration, which is something to be aware of as a low carb or keto dieter. A lower carbohydrate intake results in lower insulin levels, which cause water and electrolytes, like salt (i.e., sodium), to be flushed out by the kidneys (3).

If levels drop too low, salt cravings are triggered to get you to eat or drink more.

There are many reasons why we crave chips and other crunchy and salty snacks. However, giving in to those cravings creates a roadblock to living life at a healthy weight. Therefore, we need some solutions to move past the cravings.

One thing to keep in mind is that a nutritionally balanced body is a hunger-satisfied body. That is a nice catchy little phrase, but because of the complexity of the human body, maintaining nutritional balance is an ongoing process. This is why cooking low-carb, high-fat meals at home using whole foods is a valuable tool for your success.

Remember that Sensory Specific Satiety phenomenon that I mentioned earlier? When you follow a low carb, high-fat diet, you quickly find many enjoyable foods to choose from. These whole foods satisfy hunger, and because the flavors are relatively limited, you stop eating when you feel full.

Processed foods, on the other hand, have been manipulated to intensify certain flavors and textures. They often contain a combination of salty, sweet, and savory flavors. Each of those flavors activates hunger differently, leaving you feeling unsatisfied until you’ve eaten your fill of salt, sugar, and fat. And by the way, this happens even with processed snacks and bars that have the words “keto-friendly” on their label.

You’ll also feel more in control of cravings by taking a preemptive approach to dehydration. To do so, you want to replenish both water and electrolytes. Fortunately, this is a simple task that can be accomplished by placing an electrolyte supplement, such as Endure Electrolyte supplement, into a glass of water. These supplements provide your body with salt as well as potassium and magnesium. Adding a pinch of sea salt to a food or drink is another way to replenish sodium, chloride, and other trace minerals.

Keeping your body nutritionally balanced and well hydrated will help you avoid giving into salty, crunchy cravings. But this video would not be complete without providing a few suggestions for low carb food swaps.

No doubt, some of you have questions about pork rinds (a.k.a. chicharrones, cracklings, cracklin’s). Pork rinds provide a satisfying crunch and texture that is similar to chips. You can argue that pork rinds are a step up from potato chips because they are high in protein and do not contain carbohydrates. However, the thing to keep in mind is that even though they do not have the same addictive mix of ingredients as a potato chip, pork rinds can be easy to overeat when used as a snack.

This is particularly true if you are eating pork rinds with artificial flavorings. I will use crushed pork rinds in a recipe as a substitution for high-carb breading. However, just switching from being a regular potato chip snacker to being a regular pork rind snacker will not get you the overall positive results you’re looking for.

You will be better off selecting non-starchy vegetables over chips or pretzels. However, by themselves, they don’t provide a lot in the way of satisfying a craving. Two ways to make them more valuable as a craving-curbing food are having them with full-fat dip or including raw veggies in a meal. For instance, I shared my Mexican Shredded Beef Bowl recipe with you in an earlier blog post.

It is a hearty low-carb, high-fat meal that is topped with crunchy raw vegetables.

Trail mix can be a healthy alternative to chips. However, there are pitfalls that you’ll want to consider before picking up a bag at the grocery store. Store-bought trail mix contains the same addictive trio of carbs, fat, and salt that we see in potato chips and is very calorie-dense.

So, one small handful can easily turn into multiple handfuls and hundreds of calories consumed in a matter of minutes. You can make homemade trail mix by roasting nuts and seeds in the oven. This will be a healthier option, but you’ll still want to monitor your portion size to avoid overeating.

Popcorn is another crunchy snack that low-carb dieters ask about. There are pros and cons.

On the pro side, popcorn is a low-calorie snack that contains vitamins, minerals, and polyphenols, which act as antioxidants. However, it is a whole grain, so it contains a substantial amount of carbohydrates with about 6 grams of carbs per cup.

If you can eat just one cup of air-popped popcorn, it’s not a low-carb diet deal breaker. However, if you add melted butter and salt, you have that same addictive trio of ingredients that we talked about earlier.

There are low-carb snacks that provide a crunch. But many of these food swaps have been processed or manipulated to increase their crave factor. Replacing one addictive food with another will prevent your progress.

The best way to get on top of crunch and salt cravings is to cook your own low carb, high fat meals made up of whole foods and take steps to prevent dehydration by replenishing water and electrolytes daily. If you’d like a list of low carb foods, you can download my list of 100 low-carb foods here.