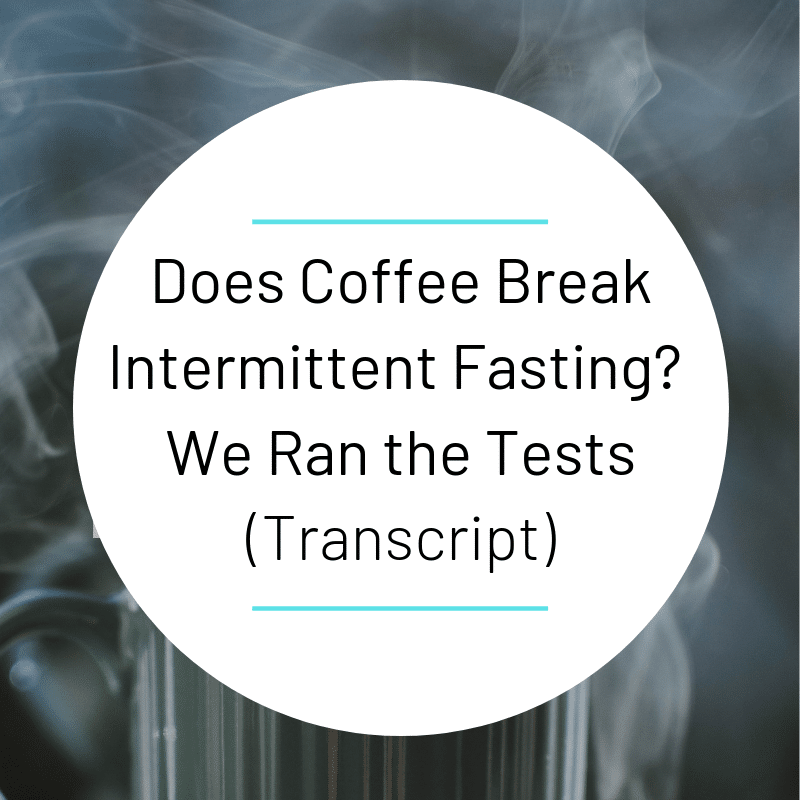 We are often asked, “Does coffee break intermittent fasting?” So we decided to put black coffee to the test!

To do this, we spent two different days testing our blood glucose and ketones. We bring you our results in this blog post!

Can I Drink Black Coffee While Intermittent Fasting? [Video]

Coffee does not have any calories, so it does not break a caloric fast.

If you follow us, you know we have tested a lot of different things.

Some of those things were non-caloric sweeteners.

Despite having no caloric value, they did have some metabolic effect on us. It was either lowering our ketones or raising our blood glucose.

So it wasn’t a “slam dunk” that coffee, even though it didn’t have calories, wasn’t going to affect anything.

We were hoping it wouldn’t affect anything.

Oh my gosh, that would be upsetting.

Side note: We used half-caffeinated coffee for this experiment. In the sixteen ounces of coffee, we estimated a hundred milligrams of caffeine total.

Here is what we did:

So here is what we found:

All in all, that is an eleven point swing, but that’s relatively insignificant.

So again, a little bit of movement in the readings.

However, when you take into account the possible error of testing itself, it is pretty insignificant.

So, we didn’t control every variable, but there was not that much difference in my blood glucose.

Coffee did not seem to influence Becky’s blood glucose significantly

That’s also why testing dates are not very fun – you can’t do anything during these two hours!

I’m just throwing that out there.

I only had a four-point range.

So, really, it did absolutely nothing to my blood glucose.

Which, you would expect it not to do anything because it is nothing.

So that’s a 29 point difference.

That is pretty significant!

You have probably seen it before.

I often start the mornings a little higher on the glucose readings and little lower in ketones.

However, for black coffee to drop my blood glucose like that, that’s pretty substantial.

Coffee resulted in a significant drop in Keith’s blood glucose compared to no coffee.

We have also talked about the “dawn effect” before.

This may explain having a high glucose reading in the morning, but yeah; That was interesting.

So if we can conclude anything from that, we can say that coffee did nothing to my [Becky] glucose, but for you, it may have given you a little bit of an edge.

Yeah, I get to have coffee, and you don’t.

No, I don’t think that’s what that means.

Now let’s take a look at what the changes were in our ketones.

Alright. With no coffee, you started at 1.8 mmol/L.

That is very good.

So, again, the readings stayed relatively stable during that whole time when you had no coffee.

So a substantial increase again in ketones when you drank coffee.

Coffee resulted in a significant rise in Becky’s blood ketones compared to no coffee.

Also, that was black coffee; there was nothing mixed in it.

So there you go, I can have coffee too!

Okay, I guess we can both have coffee.

Let’s take a look at what happened to your ketones when you did not drink coffee compared to drinking coffee.

So, as we just said, my ketones are low a lot of times.

I’m not in ketosis, technically, first thing in the morning.

So I stayed pretty much the same that entire time on the morning that we had no coffee.

If you look at my ketones when we had coffee, I started at 0.3 mmol/L. Another stellar morning.

The readings just stayed pretty steady. It didn’t do anything to my ketones at all.

Coffee did not seem to influence Keith’s blood ketones significantly

Well, but both of those readings improved with coffee.

So here is the bottom-line:

Well, we don’t see any reason why not!

If anything, there is a possibility that it might help you.

It lowered Keith’s blood glucose, and it raised my ketones.

CONCLUSION: Coffee did not seem to break our fast. Instead, it may have helped our ability to burn fat because it lowered Keith’s glucose and raised Becky’s Ketones.

So, there you go.

We’re going to keep drinking it!

We will keep drinking coffee while intermittent fasting.

With that said, you might want to do your own testing, but as far as we’re concerned coffees got the thumbs up!

Thanks so much for reading, please subscribe to our YouTube channel. We do a lot of these tests, and we’re happy to bring them to you.

What Breaks a Fast? Our Tests