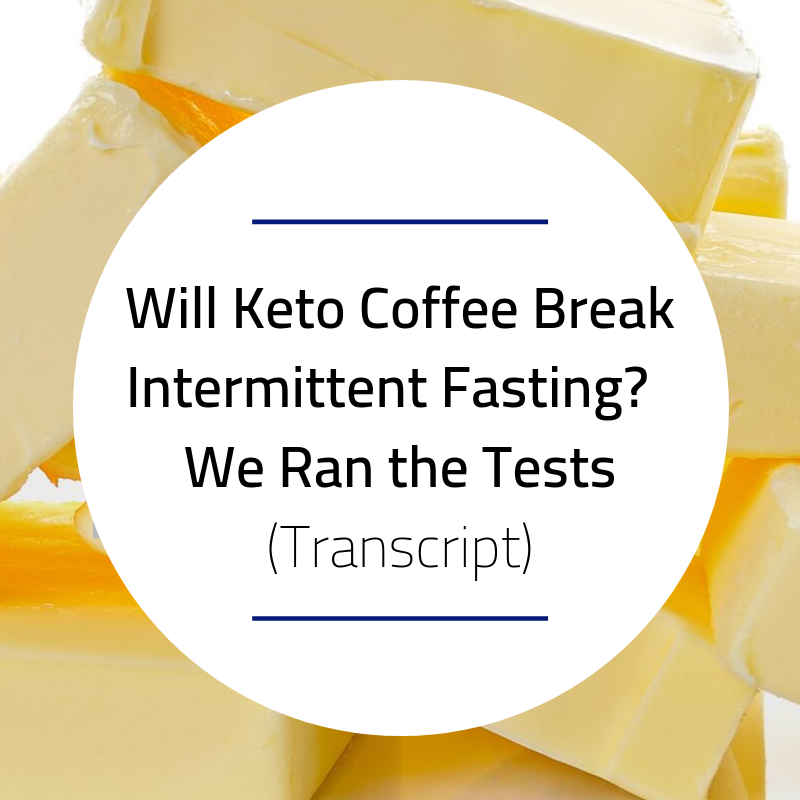 You guys asked, “Will keto coffee break a fast?”, so we ran the tests!

We spent four days testing the effects of these drinks on our blood ketones and glucose readings. We tested…

These painful moments [pricking our fingers] are for you!

Definitive Test Round 2! Will Keto Coffee, Coconut Oil, or Ghee Break Your Fast? We Ran The Tests [Video]

We love the reaction you guys had to our last definitive test video, where we tested a coffee with cream, MCT oil, and butter on our ketones and glucose levels.

However, you were not shy about telling us what we missed!

One of the most frequent comments we got was that we should have tested all three together to see how a full keto coffee, also known as bulletproof coffee, affects a fast.

Actually I believe you told me we should do that because the audience is going to ask.

Well, I’m sure they will find things to ask after this one too!

So we got back down to business and started another round of testing.

We stuck to using the scientific method. This means we:

The materials we used we’re a precision Xtra blood ketone and glucose monitor.

You’ve seen it before. We have our ketone strips, glucose strips, and our mugs of coffee out along with all of our testing ingredients!

For this test, we practiced 16:8 intermittent fasting. So we stopped eating at 8 p.m. the night before.

We did not exercise, we did not take supplements or anything like that, during our fast.

Insulin Is The “Fat-Storing Hormone”

We should mention that we decided an intermittent fast will be broken if the items added to our coffee cause a significant increase in our glucose readings.

Right. So we’ve talked about that in different videos and blog posts.

Basically, how it works, is insulin is your “fat-storing hormone”. If insulin is high, your body is in fat-storing mode and not in fat-burning mode.

Here’s the hypothesis we tested on day one:

Keto coffee with MCT oil, heavy cream, and butter while intermittent fasting will not knock us out of ketosis or spike our glucose.

Our experiments all lasted two hours.

So we took our readings initially at zero minutes, then again at 30 minutes, 60 minutes, and 120 minutes.

Right, as you can see from the results, Becky had a fairly significant rise in her ketones over the two-hour period.

I started at a frustratingly low level, 0.3 mmol/L, and ended at 0.7 mmol/L, which in our opinion, was actually a significant rise.

We say that because I have a hard time getting into ketosis even when I eat very few carbs.

So, the fact that I started below what is considered nutritional ketosis and then got pushed into ketosis after drinking the keto coffee seemed pretty significant.

Yeah, I would agree it’s kind of interesting.

So, did it help you get into ketosis AND this is not the only time during our testing period that we saw these foods act as ketone boosters almost like you would expect to see with an exogenous ketone.

So that piqued our interest, to say the least, but before we get into that, let’s look at how keto coffee made with MCT oil affected our glucose readings.

So Becky’s glucose readings went down slightly during the test. Starting at 84 mg/dL ending in 80 mg/dL, which is not a real significant difference.

He started at 100 mg/dL. After drinking his Keto coffee and waiting two hours his blood glucose was down by 17 points.

This was a decent drop. So this is a pretty easy conclusion.

Will drinking Keto coffee made with MCT oil, cream, and butter knock you out of ketosis?

No. If anything, it could give you a bit of ketone boost and a lower glucose reading.

Right, so this finding was in line with what we had found from when we tested these three things [MCToil, cream, and butter] separately.

Cream and butter alone gave our ketones a slight boost and MCT oil raised our ketones the most.

So we’d say that MCT oil is a real clear winner here, but we had more tests to run!

Right, so the next thing you guys had questions about was coconut oil. MCT oil is derived from coconut oil, but they’re not the same thing.

Therefore, it makes sense that your body will handle them differently, and they did.

If we drink coffee with coconut oil while intermittent fasting it will not knock us out of ketosis or spike our blood glucose.

we drank 16 ounces of coffee mixed with one tablespoon of coconut oil and then tested our blood glucose at 30 minutes, 60 minutes, and 120 minutes.

Right, what happened was a whole lot of nothing.

My ketones started at 0.3 mmol/L and went up a little bit right after drinking the coffee with coconut oil.

However, then it did settle back down again for a net gain of just 0.1 mmol/L.

When we look at our blood glucose readings and how they were affected by the coconut oil, we see that my glucose started at 79 mg/dL and ended at 78 mg/dL.

Keith’s glucose reading at the beginning of the morning was 107 mg/dL and then went up to 120 mg/dL before dropping down to 96 mg/dL at the end.

So did coconut oil knock us out of ketosis or spike our glucose?

We’re gonna say no, but the 13-point [glucose] jump that I had right after drinking the coconut coffee was a finding of concern.

Yeah, and these results were much different than our results with MCT oil.

If you are putting coconut oil in your morning coffee, you are most likely not breaking your fast.

However, we would say you are better off switching to MCT oil. Agree?

On to day three, where we made another type of keto coffee to test, will keto coffee break a fast?

So we hypothesized that:

If we drink a keto coffee made with heavy cream, coconut oil, and butter while intermittent fasting it will not knock us out of ketosis or spike our blood glucose.

If you look at our results, you see that Becky’s ketone reading for the day started at 1.4 mg/dL and went up to 2.3 mg/dL by the end of the test.

Was that added boost from the cream and the butter? I don’t know.

It’s possible. For me, I didn’t get much of a boost with the coconut oil regardless of whether it was in my coffee or by itself.

Let’s look at what keto coffee made with coconut oil did to our glucose readings.

My glucose started at 83 mg/dL and actually went up, which was very unusual for me, to 86 mg/dL.

I don’t think I have ever had a reading that was higher after two hours on any of our testing days.

My glucose went up three points as well by the end of the two-hour test.

Becky: So what’s the verdict on Keto coffee made with coconut oil?Will it knock you out of ketosis?

Becky: Okay. Will it break your intermittent fast?

Keith: Probably not, but it could come down to how your body is handling it.

We both had a slight raise in our glucose when the coconut oil was blended into our keto coffee.

Also, I had that jump of glucose to 120 mg/dL with coconut oil alone. That is still an okay glucose reading, but it’s pushing the limit.

Yeah. It could have also just been an uncontrolled variable like an issue with the testing strip or something like that.

So let’s bring home our second week of pricking our fingers and testing will keto coffee break a fast.

So we looked first at the two different keto coffees.

Will either of those break your intermittent fast?

Which one is better?

All right. Then we looked at the single ingredient, coconut oil.

Will coconut oil knock us out of ketosis or break our intermittent fast?

It’s a little inconclusive on that one.

So the clear winner again is MCT oil.

When we did our test a couple of weeks ago and put MCT oil in by itself it was a clear winner then too. We had an increase in ketones and a decrease in glucose.

Definitely, a thumbs up for MCT oil.

All right we hope this helps to give you some ideas of what you can use while your intermittent fasting. We will have more testing in the future.

Let us know in the comments what you would like us to test and we’ll go from there, but first, we will let our fingers heal!

What Breaks a Fast? Our Other Tests: