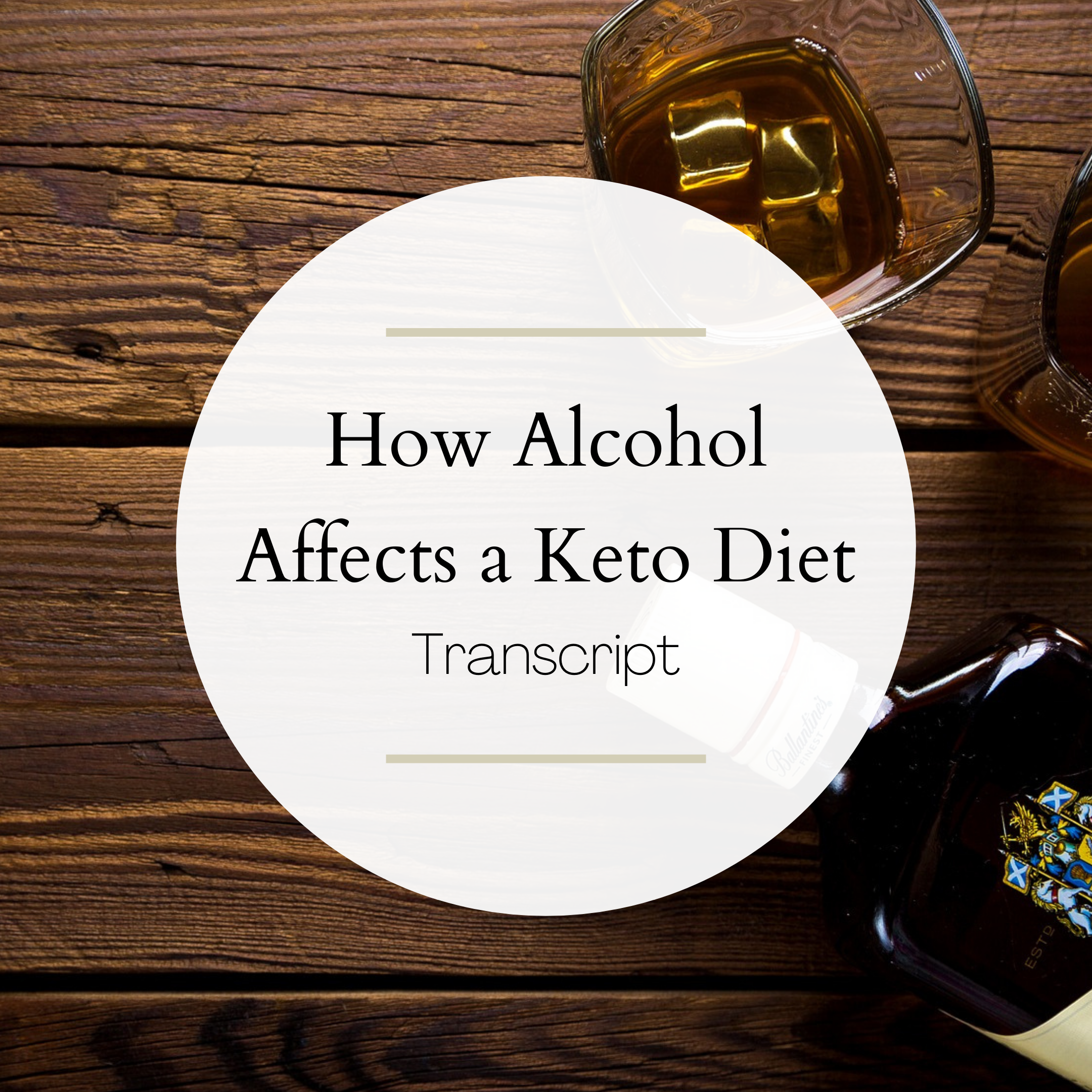 Is it okay to drink alcohol on a keto diet? It’s a good question and one that Dr. Keith will make the sacrifice to test.

In this post, we will show you the results and our testing methods from this keto + alcohol experiment.

Alcohol on a Keto/Low Carb Diet

First, I just got to say that these are the experiments that are fun to do, and fun to be a part of.

So we wanted to look at how alcohol affects your keto diet. We went through a bit of the scientific method, or as much as we could with a one-person experiment.

We have the hypothesis. I guess you could say that as far as your macronutrients are concerned, alcohol’s chemical structure is most closely related to a carbohydrate rather than fat or protein. Agreed?

So we wanted to see if the body handles alcohol like a carbohydrate, which would certainly interfere with a very low carbohydrate diet or a ketogenic diet like Keith has been following. We put that to the test using this strategy: First Keith would complete a fat fast for forty-eight hours before he had some alcohol.

Why don’t you explain why we chose to put you on a fat fast.

Sure. So for forty-eight hours, I fasted by eating only fat; Hundred-percent fat. I was getting about a thousand calories a day, so it was definitely a little restricted.

Right, and your fat was mostly in coffee.

Yeah, coffee became the medium to get most of my calories because I would put heavy cream in it and then blend it with MCT oil and butter. So that is 100% fat, no carbs, and no protein.

The point was to get me into ketosis and have no other nutrients [protein or fat] in my body that would influence the glucose level in my blood and the insulin levels that go with that.

Insulin is your fat-storing hormone. It rises when blood sugar rises. We thought if we could control Keith’s blood sugar and insulin level for a forty-eight-hour period, we would have a better baseline. Then we could introduce some alcohol to see if the drink is acting as a carbohydrate.

So go ahead and tell them how you tested your blood sugar before the test.

The first thing I tested was my ketones to make sure I was in ketosis. I was, so that was a checkmark.The next thing that I did was check my blood glucose. I hadn’t had any carbohydrates or any protein for two days. My blood glucose level was 97 mg/dL.

Now normal fasting blood glucose is anywhere between 80 mg/dL and 120 mg/dL, but that range depends on who you ask.

My blood glucose level is certainly in that normal range, but I expected that it would be quite a bit lower than that after forty-eight hours. I was a little bit surprised.

That may have been just you. Baselines are going to vary from person to person.

Right, it is a one-person experiment.

So, the next step was to drink two beers. I chose Michelob Ultra because it’s a low carb and low calorie beer. Two of those, so 24 ounces, were 95 calories each and 2.6 carbs each, as far as they say. That makes it 190 calories and 5 grams of carbs total.

Then an hour later, I rechecked my blood glucose. It typically takes about 45 minutes to an hour for alcohol to get out of your stomach and into circulation.

So we were expecting a little bit of a higher number than my starting number [97 mg/dL]. After an hour, my blood glucose was at 87 mg/dL. It actually came down 10-points.

We were just looking at that number going, ‘What is going on here?’ I mean, the first number was a little bit strange, but the second one was really strange.

So, you actually took in some carbohydrates, yet your blood sugar went down.

So why not continue it, right? The next thing I did, since I hadn’t eaten any food-food for a couple of days, is I had some meat and cheese. I figured I’d add a little bit of protein into my diet.

Then another hour later, I had another finger prick to test my blood sugar, and it went down again.

But they were crazy results. When eating, you would expect your blood sugar to go up, and then your insulin to go up, not go down as yours did.

What Do We Think Happened?

We didn’t test your insulin, that’s not something you test at home, but we do have some ideas why this possibly could be. It has to do with your liver and your liver’s ability to make glucose when you’re not eating sugar and not taking in glucose.

So why don’t you explain a little about how that is probably working.

So we’ve talked a little bit about gluconeogenesis in the past. Gluconeogenesis is your body making glucose from non-carbohydrate substrates [Protein and Fats].

By being in ketosis, my liver kept converting body fat to ketones, and part of that process is to convert the glycerol backbone of the triglyceride into glucose for the body to use.

So we surmise that in that process, my liver was making glucose for my body…

…to use during your fast during the day. Which is what you want it to be doing. Your body needs a little bit of glucose.

Yeah, absolutely. It’s doing exactly what it should be doing.

So we conjecture that adding a little bit of a sudden outside “carbohydrate” into my bloodstream was enough to shut down gluconeogenesis.

Yet, there wasn’t enough carbohydrate or glucose conversion from the beer to make my whole blood glucose go up very much. If the liver is not producing glucose and there is not enough glucose coming in, my blood sugar goes down.

The second part of that was what if I gave it some protein? Would the protein, you know, be converted to glucose because the glucose levels were low?

Again, the protein didn’t seem to be enough to start any processes like that. It actually lowered it a little bit more.

Is Alcohol on a Keto Diet Okay?

Really, it was quite an interesting little experiment, and granted, we are talking about a one-person lab rat here. So this is really the effects of alcohol on you, but it is worthy of notation, and it’s very intriguing.

So to kind of wrap this up in a nice bow, what are our conclusions about how alcohol affects the diet or, more specifically, your blood glucose and blood sugar?

Well, it is one of those things we get questioned about a lot.

If you look for answers to this question, you will find that this person will say that you have to stay completely away from alcohol because it is just like a carbohydrate, and this person says, no that’s not true.

You can’t find anything really solid in any of the literature. For this reason we decided to test it and find out.

Based on our tests, my feeling is, at least for me, that I can handle a couple of low carb beers a night without it affecting my being in ketosis.

Now that is not to say I will have the same results on a day that I’m at my carbohydrate limit. Maybe I don’t want to be having those beers then, right? So you probably need to add it into your macros and kind of figure out how much you can safely have.

But, you know, it was a fun experiment.

Well said. well, we hope that benefited you, and we hope that gives you some insights into how alcohol affects your diet.

If you would like to see the results of some of our past tests, you can check them out here:

What Breaks a Fast? Our Other Tests

for a limited time you can get our 21 Day Low Carb Challenge Program for only $24!